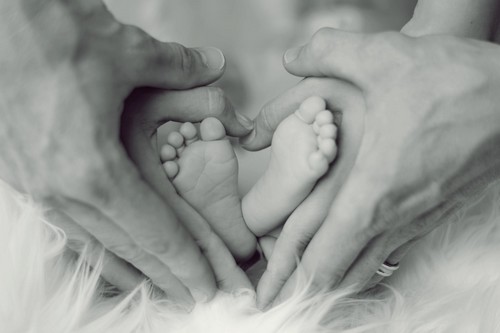 The lilititi soothing swaddle story is one of babies, professionals, and friendships…
For almost one year, a team from France Television working on a show called “Les Maternelles” reported several stories from the Saint-Cloud hospital maternity ward.

One of these stories featured Catherine, an infant care specialist, who regularly gave swaddled baths to calm and soothe the newborns.

Catherine told her friends about this show and the benefits of swaddled bathing. In addition, she mentions the desires and needs of new parents: LIGHTBULB MOMENT…

Many pediatricians and nurses assert that newborns experience a great deal of anxiety, which may not be obvious to us as adults. Being so new to the world, they haven’t yet developed a sense of orientation or a relationship to their own bodies. Just a few weeks prior to this, they had been warm and contained in their mothers' bellies as fetuses, with time to discover themselves slowly. In the last few weeks of pregnancy, the future newborn was rolled in a ball, head down and limbs folded into his or her body. Birth stretched out this fetal position: the baby was no longer contained. In some cases, newborns demonstrate uncontrolled movements throughout their bodies, called Moro reflexes (natural defense reflexes, vestiges of our primate evolution, that can result in crying, shrieking, and general agitation).
To diminish these uncontrolled movements, reassure and calm the newborn, many people use folded muslin squares or blankets to swaddle their babies. The disadvantage of this system is that it is difficult to make a tight swaddle this way, especially with a wiggling baby.

How to simplify swaddling?

After long months of trials and error, testing many prototypes, which were created by professional seamstresses and seamsters, the lilititi soothing swaddle saw daylight. And voilà, the beginning of the lilititi story.

Catherine tried the swaddle on real babies (with the agreement of the parents of course) and finalized its design.

Success! Parents began to ask where they could find the swaddle. And so the swaddle was launched!

As in many cases, intelligence, creativity, etc. function better across many brains than in just one. Catherine, Jean-Jacques and their friends (mothers, fathers, pediatricians, infant care specialists, journalists, graphic artists…) refine and polish the creation and launch of the lilititi adventure.

At the beginning of 2019, the company lilititi was registered in Versailles, the patent application was sent in, lilititi came to an agreement with a French manufacturer, and the website was created: the adventure begins!

The lilititi soothing swaddle: the story of a French creation
In Hauts-de-France, the northernmost region of France, in a town called Saint-André-lez-Lille, the factory that makes our soothing swaddles, the Société LEMAHIEU, is known as a specialist in weaving, knitting and embroidery. This company has been an independent French manufacturer since 1947, and production and quality control take place entirely within their system. This 100% French production means completely dependable quality that easily fulfills the requirements for OEKO-TEX certifications (at an independent laboratory).

The lilititi soothing swaddle has received the OEKO-TEX certification Standard 100, Product class I, (for textiles intended for use by babies or children under 36 months, that is, the class with the strictest standards) with certificate number CQ 1184/2 IFTH.

The men and women of this organization don’t only create these “Made in France” soothing swaddles; they also share our values of constant striving for excellence and of “Guaranteed French Origin.”

Lilititi’s soothing swaddle is undyed and unbleached. Its off-white color is natural and helps preserve nature.

Our team and the team at LEMAHIEU are proud to work together supporting our economy and the environment.