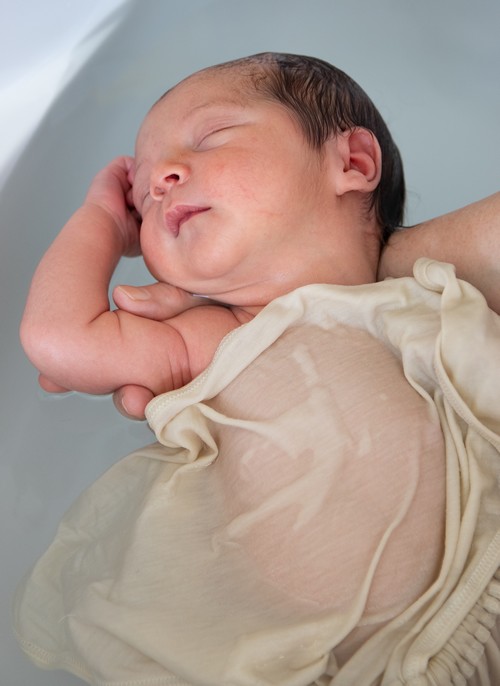 The benefits of swaddling during a "swaddle bath”

The newborn's bath is a particular moment where taking one's time is important, sometimes when undressing the baby will tense up and cry, in fact the clothes allow the baby to feel the warmth around him and also reassure him by giving "limits to his body"... The infant, when he is undressed, loses his bearings, his vulnerability and his fear can then resurface, and in certain cases, undressing can provoke what paediatricians call a "body explosion" (arms and legs spread, hands open, fingers outstretched). Obviously at the same time, the parents find themselves distressed and helpless...

During the first baths, we often think that the newborn will find the sensations known in the mother's womb, but this is not always the case. Many babies find themselves in water (at 37°) completely frightened, wriggling in all directions and looking for their parents' gaze, giving the impression of asking themselves "what is going on ? ". They are lost, they have no container, no limit... We then notice a general stress in the baby and in the parents, hence the idea of doing what we will call "a swaddle bath".

- The technique of the LILITITI soothing swaddle, a 100% French patented creation.

The LILITITI soothing swaddle is finely knitted in Jersey stitch from combed cotton (long thread) from organic farming, which ensures it is supple, soft and elastic, without chlorine, without dyes (naturally unbleached) and certified OEKO-TEX class 1 (fabric in contact with children's skin). It is very easy to use (no particular folding technique) and allows the newborn to be contained while ensuring, thanks to its elasticity, a certain freedom of movement, in particular to be able to extend and unfold arms and legs.

For several months, the baby has been kept warm in its mother's womb, bathed in the amniotic membrane.

In the LILITITI envelope, the baby is naturally contained in the foetal position (lower back rolled up, hand close to the face, legs folded) thus he finds, in contact with the water of the bath at 37° (human body temperature), the same sensations as those in the womb: he feels good, he is protected, yawns, lets himself go to sleep, lulled by the lapping of the water and the rocking of his parents...

In the bath, every part of the body is covered with cloth, only the head remains outside the envelope and one arm is freed to ensure that it is held securely (safety clip between thumb and index finger). Soaping is limited to the hair and seat. 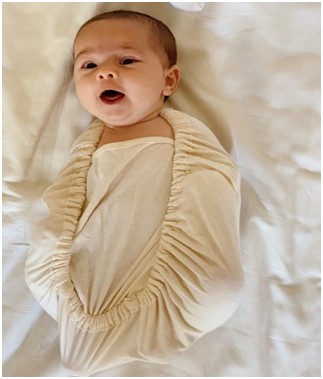 The benefits of swaddling to "soothe the newborn”

Swaddling reassures and soothes the newborn and avoids the feeling of "fear of emptiness", by containing and limiting uncontrolled movements (Moro reflexes). Swaddling allows the infant to find its bearings, to be able to distinguish the limits between its body and the world around it, and to no longer be frightened and stressed.

The benefits of swaddling are known and recognised in many countries. This practice, which dates back to antiquity, consists of wrapping the infant, from birth to about 3 months, in a nappy or a simple cloth with the aim of making it feel fuller, warmer and more like it did in its mother's womb, and thus soothing it.

Many methods exist for containing newborns, the most well-known being the use of a swaddling cloth or a simple cloth, which, by successive folds, swaddles the infant, although care should be taken not to swaddle too tightly.

The LILITITI creation "does not swaddle", it "envelops the newborn". Indeed, thanks to its elasticity, the infant has a certain freedom of movement while being contained, which allows him or her to rediscover sensations similar to those experienced in the womb, the infant is in a foetal position (back bent, hands close to the face, legs folded) and the shoulders and hips remain mobile.

Chlorine-free, dye-free (naturally unbleached) and OEKO-TEX class 1 certified (fabric in contact with children's skin), it is very easy to use (no particular folding technique) and allows the newborn to be contained while ensuring, thanks to its elasticity, a certain freedom of movement, in particular to be able to extend and unfold the arms and legs.

The softness and elasticity of the LILITITI swaddle naturally lifts the legs of the newborn towards the abdomen, and if the parent massages the belly at the same time it can help relieve discomfort from colic.